Congratulations to Carl Fudge and Sturgeon Creek Arabians on receiving Equine Canada's award of excellence for their highly successful breeding of endurance horses utilizing the blood of Pyatigorsk.  See link to full article

Bajram (Pietuszok x Bandola) was one  stimulus that sent me to Poland on the search for Pietuszok.  Soon thereafter, we evolved the line breeding program to Pietuszok & his full brother, Topol, based on the breeding principles  of Senator Tessio of thoroughbred fame. This group of sires are a result of this program. 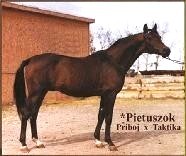 PIETUSZOK (Priboj x Taktika) was Imported from Poland in the 70s. This stallion was born in Russia and imported into Poland as a three year old. He was bred to mostly witraz mares during his stay at janow podlasky. The results of these mating's dominated the arab race track in Warsawa during their tenure there He was then used extensively at the warm blood studs in Poland before being imported into Canada by Willomar. His daughters, after racing, became some of the premium brood mares of Poland. Pietuszok's full brother, Topol, won the triple crown of Arabian racing in Russia before retiring to stud at Tersk. Two of Pietuszok's sons, Bajram and Orzel, were imported to the US where they left outstanding records both in performance and as sires. Following Pietuszok's importation Willomar embarked on a long term line breeding program using the blood of Topol and Pietuszok. This sire line continues today in our herd through the blood of Pyatigorsk through his son, Believable Image, and grandson Etaro. The contribution of Topol continues through sons of Ghazni such as Main Smoke and his son, Monjour.  View full pedigree here 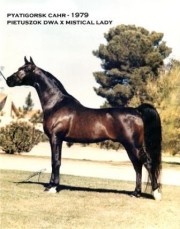 PYATIGORSK  (Pietuszok Dwa x Mistical Lady by Tornado)  This bay, 15-3Hh stallion, was syndicated as a yearling for one million dollars and paid himself out at the breeding shed in his lifetime.  He is currently the leading Canadian sire of endurance horses.  Pyatigorsk also sired major race horses (Tak) and a US National champion endurance horse (Reason to Believe).  He left a number of outstanding brood mares and a number of useful stallions.  Pyatigorsk was the ultimate athlete and a joy to ride.  View full pedigree here.  View PYATIGORSK video here 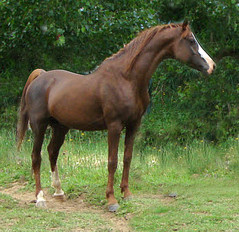 BELIEVABLE IMAGE  (Pyatigorsk x Believe in Me by El Kasaka),  This 2003 chestnut colt, is from Pyatigorsk's last foal crop. Image's grand dam is by Pyatigorsk's sire, Pietuszok Dwa. He represents line breeding quite close up. His full sister, Roxxanne, was an outstanding race mare.  Image has an excellent attitude towards training. His first foals will arrive in 2014.   Breeding fee is $1,500 with a live foal guarantee.   View full pedigree here 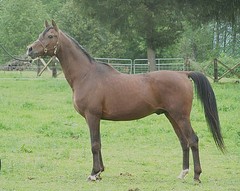 PROTOCALL  (Pyatigorsk x Resza by Rezus)  This bay, 15-1Hh stallion was used at Willomar for a number of years.  He sired very athletic, competitive horses that were often hard to get started under saddle, but once well trained, were a joy to ride and compete.  Protocall's full brother, Tak, won the three year old Arabian racing futurity in California and then went on to be a very successful race horse in the Middle East.  Another full brother, Reason to Believe, is a US National champion endurance horse and has represented the US at the world equestrian games.  Protocall's son, Pygmalion, was the leading American horse on the US team at the world equestrian championships in Aachen, West Germany.  Protocall's son, Kasydason, is presently doing very well in eventing and dressage.  Protocall has left us with a number of excellent broodmares.  View full pedigree here. 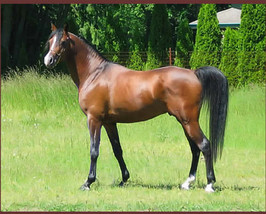 ETARO  (Protocall x Believe in Me by El kasaka), Etaro, a 1996 bay 16 Hh stallion is one of Protocalls best sons. Protocalls full brother Tak won the three year racing futurity in California and went on to be a successful race horse in the Middle East. His other full brother, Reason to Believe, is a national champion endurance horse. Protocalls son Pygmalion was the leading American horse at the world equestrian games in Aachen. Provocative Too is a fine example of Etaro's offspring.  View full pedigree here.  Etaro is owned by Majk Endurance Arabians link here 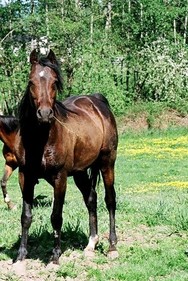 MAIN SMOKE (Ghazni x Jaina by Pyatigorsk), bred by a knowlageable breeder, Andrea Deane, of New Mexico This colt's sire was by the Topol son Saljut and interestingly Willomar tried to purchase Saljut's full brother in Russia but he failed his importation blood test. Main Smoke has produced quality foals with refinement and a great attitude for competition. We have used them with success in eventing especially for youth riders. Many of his daughters have excellent potential as brood mares.  View full pedigree here. 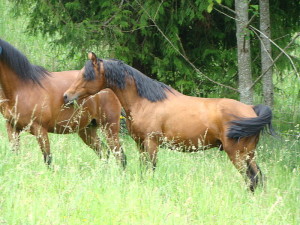 MONJOUR   (Main Smoke x Maamoiselle by El Kasaka),This 2006 stallion has an excellent attitude towards work. This 15-3Hh stallion has two foal crops on the ground which show much promise. Judging by his foal crops, we expect him to be a superior sire both for anglo Arabians and for purebred arabians.  View full pedigree here.  Stud fee:  $1,000 with a live foal guarantee