Congratulations to Carl Fudge and Sturgeon Creek Arabians on receiving Equine Canada's award of excellence for their highly successful breeding of endurance horses utilizing the blood of Pyatigorsk.  See link to full article

We have been breeding Arabian horses for over fifty years. Our goal has always been to breed Arabian horses of refined quality and type that could be successful in classic athletic competition. To this end we launched a line breeding program to concentrate the superior athletics of two full brothers who were superior athletes themselves and produced superior athletes. We chose for this purpose Pietuszok and Topol both bred in Russia. We had the good fortune to import Pietuszok in his later years and the good fortune to own Nut, a Topol son out of Niagara.  Niagara is by the superior race horse Semen and out of Nomenklatura (by Naseem).  We also used Topol through Ghazni, who was sired by a Topol son in Germany.  Concentrating genetics in horse breeding is a long term adventure—indeed a life time adventure—we feel we have a unique group of mares concentrating athletics yet still maintaining type and quality.

During our many trips to Europe we were struck by the quality and elegance of the daughters of Arax. Arax was a superior race horse; was bred in Poland, and exported to Russia where he sired a number of outstanding mares. These mares were so prized by breeders they were impossible to purchase. We were able eventually to lease one of these magnificent mares and to breed her to Mag who was out of the magnificent Arax mare Magnolia. We bred this offspring to El Kasaka thus line breeding again to one of the great sires of Tersk, The results of this program are the daughters of Nihani. 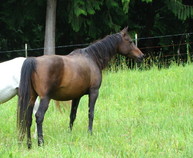 WM SHOW TIME  (Pyatigorsk x Stop the Show by Pesniar)  2002 bay mare.   The tap root family of this mare is Sabellina, founder of a dynasty of superior race horses. Sabellina's daughter, EW Sabaska, by Bask, was one of the great mares of her time. Show Time has been a superior producer bred to Monsour. We expect her daughters to be superior brood mares of great athletes.  View full pedigree here 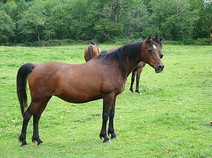 OPPALESSENCE  (Pyatigorsk x Opalina by Nut)  1992 bay mare The Tap room mare of this family is Psisha (Salon x Poklonnaja).  Psisha's  daughter, Applicatia (by Pesniar),  was purchased in Tersk and was bred at our breeding farm in Holland to Nut (Topol x Niagara). Oppalessence has produced very well bred back to sons of Pyatigorsk. Her offspring have size quality and great minds  View full pedigree here 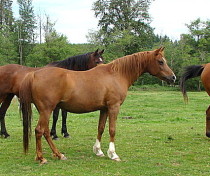 KALLINDA  (Protocall x Kasyda by El Kasaka)  2002 chestnut mare. The tap root mare of this family, Ida, was imported from Holland in the 80’s. Ida, a bay mare with correctness and amazing type had the most elastic way of going I have ever seen. This athletic ability has carried on in her offspring and grand-get. Her El Kasaka daughter, Kasyda, has produced amazing athletes by Protocall. Her son Kasydasun, is presently winning in eventing and dressage . Kallinda is a full sister to Kasydasun.  View full pedigree here 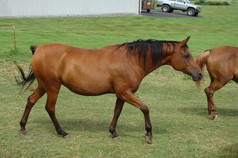 WM PRIMA  (Protocall x Piramida by Marsianin)  2002 bay mare.  The tap root mare of this family is Ptashka. Ptashka’s granddaughter, Poslannitsa (by Nabeg), was imported and bred to Marsianin to produce Piramida. Poslannitsa was one of the greatest mares to leave Russia. WM Prima will be bred to Monjour in 2013. WM Prima has size and scale (despite Nabeg in her pedigree) and produces size more in line with Arax in her pedigree. A very useful broodmare at this time.  View full pedigree here 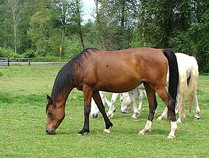 The above  four mares are full sisters.   Their colors reflect, in my opinion, different parts of their pedigree. The bay reflects phenotypically Arax;  the greys, the seglawi Naseem blood of Salon; and the chestnut, more of the size and scale of Arax. The have all had foals by Main Smoke and the resultant offspring, all trained for eventing, reflect the relative phenotypes.  This is a group of very high quality mares of straight Russian lineage with almost no Aswan in their genetics. WM Narax was started under saddle and had an excellent attitude to work.  View full pedigree here 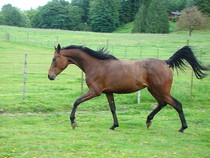 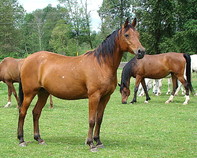